Hengstler's success story started in 1846. Thanks to the dynamism and innovative skills of our employees, we are one of the leading manufacturers of industrial grade counters and control components, such as counters, rotary encoders and relays. By adding printers and cutters we have made a logical enhancement of our product range. We are understandably proud of our heritage but also well aware that a long history is no guarantee in itself for a successful future.

The core of the Hengstler business was formed in 1846 in Johannes Hengstler's workshop with the manufacture of gongs for clocks. 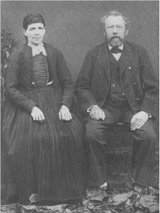 Founder of the company Johannes Hengstler (Snr.) with his wife Anna in Aldingen 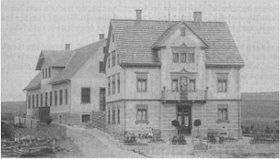 The house and first workshops at Hauptstrasse 69

In 1912 the company began manufacturing precision turned parts. In 1926 Hengstler acquired the Efunda company, which manufactured counting apparatus and the company, despite the economic crisis at the end of the 1920s and partial industrial disarmament when the war ended, went from strength to strength. From 1954 on, business boomed and Hengstler constructed 100 company-owned dwellings to be able to house its staff. A technical milestone was set when the company acquired its first plastic injection moulding machine, which allowed it to manufacture its own plastic parts. This step was a key factor in enabling Hengstler to develop new product ideas, such as the revolutionary counter system 400 which was launched onto the market in 1957. The gong-making business for clocks was not sold off until 1961. As early as 1962, the first foreign subsidiary was founded in the United Kingdom and others followed at regular intervals. From 1962 to 1966, 60 houses were built for employees using a self-help principle. In 1969, flexible working time was introduced in the company – a highly popular move. The first products for recording employees' presence or absence were based on counters and these "Flextimers" were sold successfully throughout Europe. Electronic systems were then developed and, in 1980, a completely new concept, consisting of a number of microprocessor controlled devices with user guidance via instructions on-screen, was introduced.

The relay factory in Wehingen in 1983

Relay production started in 1983 with the acquisition of Haller Relays in Wehingen.

Ten years later, manufacture of turned parts was ceased and a joint venture founded in Qingdao, China. The family that owned the company gradually withdrew from the business because they did not have a direct descendant to keep up the tradition, and instead appointed external managers. In 1993, the first modular rotary encoders with opto-ASIC technology were launched onto the market – high-tech developments from Aldingen. 1995 turned out to be a decisive year: Hengstler was bought up by the US Danaher company, who acquired a 100% share. In the same year, the Veeder-Root company in Aldingen, hitherto a competitor of Hengstler making counters, became integrated in the company and one year later, KACO Elektrotechnik in Heilbronn, a relay manufacturer, was acquired. In 1998, the time recording and access control business was sold to MBB-Gelma and, in a tit-for-tat arrangement, that company's rotary encoder business was acquired. In early autumn 2002, Hengstler purchased the thermal printer business from BDT, Rottweil. Over the years, Danaher’s portfolio evolved into an increasingly global, growth-oriented set of scientific and technological businesses, generating over B in revenue in 2015. In July 2016, Danaher separated into two independent, publicly traded companies: Danaher and Fortive. Fortive is now a focused industrial growth company driving innovation in the areas of field instrumentation, transportation, sensing, product realization, automation and specialty, and franchise distribution. Hengstler belongs to the FORTIVE from July 2016 on. 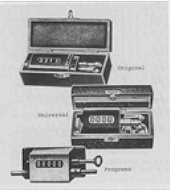 As can be seen, the history of Hengstler has been long, eventful and interesting even though this has only been a brief summary of our heritage.

Gongs and other historical Hengstler artefacts can be seen in the museum in Aldingen - in the original house owned by Hengstler founder Johannes Hengstler, Hauptstrasse 69.