Waste Not, Want Not

The world is increasingly concerned with protecting the environment and reducing its carbon footprint through innovative technologies and extensive recycling. There are numerous laws worldwide which encourage or even mandate recycling for things like glass, plastic or paper. One of the biggest issues that has arisen through recycling programmes is how to collect and pre-sort recyclables centrally, prior to transport to a recycling centre. 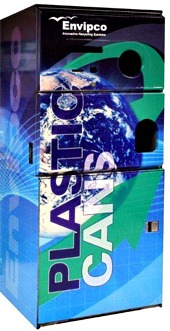 Reverse vending solutions have been designed to solve this problem as, when strategically located at points like supermarkets and other food stores, the collection function can be centralised. Customers put recyclables in and receive a voucher in return, which can usually be redeemed for cash. This has been a highly successful solution, as customers who have purchased bottles or cans from a convenience retailer often return there regularly, so they can bring recyclables on a return trip. Reverse vending machines can handle plastic, glass or metal. Steel is automatically sorted from aluminium, plastic and glass colours are separated and plastic returns are checked to verify that the material is PET. Once these questions are resolved, the returned item is crushed or shredded to minimise the room it takes up. The sorting and compression of material, then, can be carried out before the material is transported to the local recycling factory.

A subsidiary of Envipco Holding NV, Envipco USA manufactures reverse-vending systems for worldwide distribution. One of a few specialised companies who actually manufacture this type of equipment, Envipco founder Bruce DeWoolfson was awarded numerous patents as early as 1982. Envipco reverse-vending systems can be found globally in the US and across Europe. Envipco’s focus is not just to make machinery, but to offer innovative recycling solutions. To that end, other Envipco divisions participate in all aspects of the recycling process.

When a customer wanted to print coupons rather than simply vouchers from Envipco CF1500 reverse-vending systems, Envipco contacted Hengstler. Envipco has been a long-time user of the Hengstler C-56 printer and was well-aware of the capabilities of Hengstler’s printers. In order to avoid long strings of coupons hanging out of the machine, a printer with autocutter was needed, so Envipco selected the Hengstler X-56, part of Hengstler’s eXtendo line of thermal printers.

Available in two models covering paper widths from 49 to 86 mm, the X-56 and X-80 thermal printers are suitable for reverse-vending systems. High speed serial or USB interfaces, coupled with print speeds of up to 250 mm/second, help customers on their way, while allowing for the printing of additional sales messages, images and coupons. Sophisticated formatting commands in the printers make the generation of complex, mixed graphic images such as coupons possible. These printers, with their optional wide temperature/humidity range, are designed for 25°C to +70°C and 100% humidity conditions. The versatile configuration system used with the Hengstler eXtendo printers allows the OEM to buy only those features that are needed for a specific application.

Envipco selected a version of the X-56 to match the specific needs of their CF1500, citing the requirements to use the same paper as the C-56 printers already in use and to incorporate an autocutter. Ultimately, five factors were the most influential in their selection: a chute sensor to detect paper remaining in the chute to allow a reminder to the user to take their voucher; a printer that would fit in a limited space; a reliable, long-life cutter that could handle the thicker voucher stock without difficulty; an ability to print in different languages using downloaded font sets; and, finally, a competitive price point for the features ordered.

Other eXtendo benefits for reversevending applications include integrated paper roll holders for various sized rolls, high humidity capability and long printer life. Design integration of the X-56 was simplified by the sophisticated software tools that are provided with the printer driver, including a software development kit (SDK), various diagnostic tools, programming samples and sample printouts.