In the wake of the devastating March 2011 earthquake and nuclear disaster in Japan, plans for generating renewables have again picked up pace around the globe. Generating electricity from wind power currently is the most widespread and common type of energy recovery. To achieve highest possible efficiency, every single component of a wind power plant has to meet stringent requirements. This is also true for encoders, which are needed for the precise positioning of the three rotor blades – the so-called “pitch control”. Dynamic pitch control of the rotor blades significantly contributes towards higher efficiency. At the same time, encoders must exhibit a long lifetime under extremely harsh environmental conditions. This article explains which sensor types are used for pitch control applications.

For more than two decades, the use of wind power has been a tried-and-tested method to generate electric current. Worldwide, the number of orders for wind power plants has risen after the terrible catastrophe in Japan, and the goal is to feed more electricity into the grid than ever planned before.

The highest part of a wind power plant, just about 100 meters above ground level, accommodates components which seem almost invisible as compared to the huge nacelle and mighty rotor blades, gearbox and generator. However, their role should not be underestimated and is crucial to exploiting maximum energy from the lightest breath of wind: we are talking about encoders being used on the nacelle and (mostly three) rotor blades.

It’s the rugged sensor technology inside the encoders that makes it possible to yield maximum output from wind power. The encoder “shows” the control unit the angular position of the nacelle in relation to the wind direction and allows realigning the nacelle’s azimuth as necessary.

One encoder for each rotor blade indicates each rotor blade’s position in relation to the rotor axis. Dynamic pitch control is used for increased efficiency, i.e. the rotor blades are fully turned against the wind during times of low wind speeds. When the wind speeds are high, the rotor blades are turned away from the wind, thus allowing the plant to remain in a safe operating condition. Just as for many other rotational applications, this specific task in the wind industry sector calls for various encoder solutions: starting from simple approaches requiring only one incremental encoder right through to two redundant absolute encoders.

Encoders generally have to meet stringent requirements. The models which have to prove their reliability on a rotor blade must withstand shock, vibration, centrifugal forces, great temperature differences (from – 40 to more than + 100 °C), magnetic fields in their direct vicinity, and even lightning overvoltages – all this throughout their service life of 20 years!

The maintenance costs charged for an encoder are out of all proportion to the actual costs of an encoder. This is especially true for offshore applications. In addition to half a day’s labor costs for the two mechanics that have to exchange the encoder, significant costs have to be paid for leasing a boat and crew.

As a result, encoders for pitch-control applications in wind power plants must be as rugged as possible. Various pitch-control versions are available: one version has the encoder placed on a motor-brake-gear combination (Fig. 1). Another version has a sensor directly mounted on the slewing ring of the rotor blade (Fig. 2). In this application, the encoder has to fulfill totally different requirements because the mechanical loads on the sensor are significantly higher as compared to the pitch-drive assembly of the gear-motor-brake combination.

Encoders from Aldingen for Wind Power Plants around the World

Hengstler, one of the leading encoder manufacturers, offers a comprehensive product range including different versions of incremental and absolute encoders (single-turn and multi-turn). To meet a great variety of requirements, the following options are available: optical and magnetic encoders reaching very high resolutions, external diameters from 30 to 80 mm, and hollow-shaft or full-shaft versions. The encoders are equipped with the common mechanical and electrical interfaces. In addition, Hengstler Aldingen supplies highly corrosion-resistant encoders for areas with potentially explosive atmospheres.

Being specialized in sensor and counter/timer technology, Hengstler offers long-standing experience in the field of wind energy and thus, optimized solutions. Encoders for pitch and azimuth positioning and feedback control for generators excel with the following key characteristics:

The absolute and incremental encoder type AC 58-I-SSI has been specially developed for direct mounting on motor-brake-gear combinations. Due to its extremely robust and compact design, AC 58-I-SSI (SSI=SYNCHRONOUS-SERIAL INTERFACE) is the device of choice for pitch-control motor assembly. 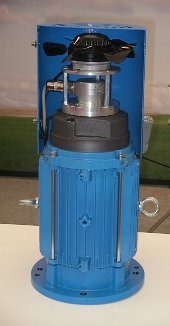 The completely optical sensor technology of AC-58 offers benefits in terms of ruggedness (interference resistance) and longevity. Neither large components nor batteries can cause deviations or even total breakdown of the encoder. Scanning – both single-turn and multi-turn – is effected by means of optical components (Fig. 3).

The multiturn segment used by Hengstler features a rugged gearbox; therefore, the strictly optical assembly of AC 58 is non-susceptible to magnetic interference. Significant magnetic fields are produced by the motor or brake construction of a pitch drive. Although good shielding is ensured by the encoder housing, these magnetic fields will have an impact on the encoder after several years.

AC 58 is designed to withstand temperatures up to 120 °C (within the drive range), and speeds up to 12,000 rpm. It therefore surpasses the requirements laid down for wind power plants. It does not need any high-performance and longlife-operation batteries and thus, proves to be an extremely robust and low-maintenance device. This is in contrast to many other encoder types, which also use gears for multi-turn scanning but rely on magnetic scanning technology, which is susceptible to magnetic interference caused by the motor and/or brake and, in the long run, will lead to problems by transmitting incorrect signals to the control unit for rotor blade adjustment. This again will inevitably result in downtimes and the resulting high (and unnecessary) maintenance costs of a wind power plant.

It would also be a fallacy to believe that the manufacturing costs of a wind power plant can be kept low by using low-cost magnetic multiturn encoders. The risk of failure described above, caused by the effects of temperature and/or magnetic fields, as well as aging of the battery, will remain too high, even after many years of operation. It proves to be more cost-efficient to rely on the tried-and-tested technology of an AC 58 encoder made by Hengstler.

Applications using optical, gear-based multiturn encoders of the type AC 58 by Hengstler have become widely accepted in wind power plants. Positions are determined by means an optical transmitted-light method. The mechanical gear for multiturn is scanned optically, so that it is not necessary to check for magnetic fields which may, first and foremost, be produced by the brake assembly of the pitch drive. The optical scanning principle is non-susceptible to magnetic interference; therefore, AC 58 can be mounted on all motors with brakes. Moreover, the encoder offers high signal resolution and allows scanning the absolute value and an additional incremental signal, which can be used for speed control or as a reference value. Optionally, incremental signals can be recorded in real-time for speed control.

back to Wind Energy